The Monday following the conference, those of us who hadn’t left on Sunday gathered together for a guided group excursion by trolly to see some of the sights of Philadelphia.

Because we had the stroller and were traveling with the baby, we opted for the enclosed air conditioned trolley.  Ceddy wanted to go on one of the other trolleys with Grandma. That was fine with us, yet another reason we were so happy she came.  (YAY Grandma!)

Our first stop was the Philadelphia Museum of Art… other wise known as the ROCKY STEPS!!

So, of course, we all had to RUN to the top, singing the Rocky Theme as we did. 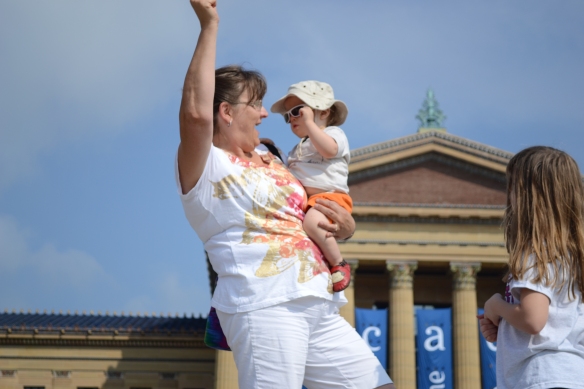 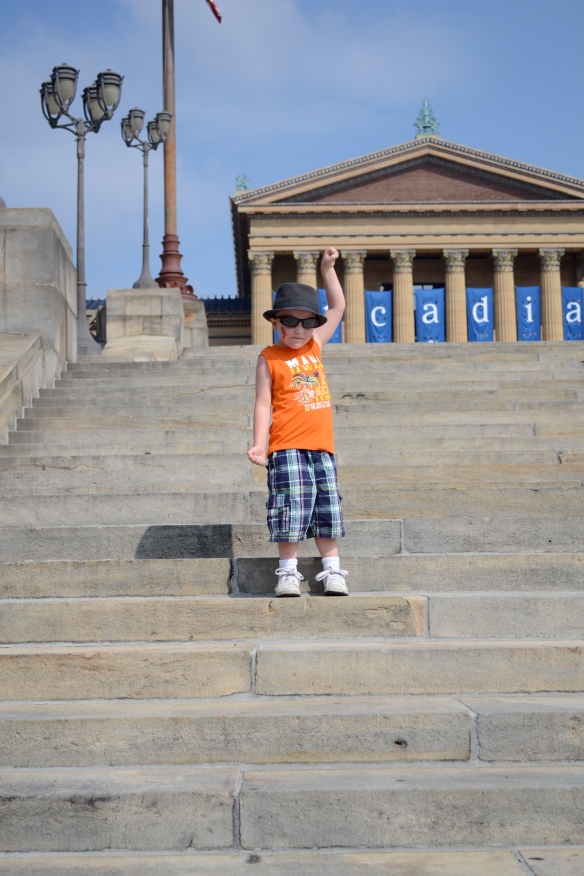 After we’d all had our chance to run to the top, we waited in line to get our photo taken with the Rocky Statue that was in Rock III (I think) – it’s not at the top of the stairs like it was in the movie, kind of tucked away at the bottom and to the side.  Still awesome.

We all got back in our trolleys and off we went on a tour of just a small portion of the thousands (yes thousands) of murals around the city.  i took lots of pictures.

As we pulled away from the museum, our friendly tour guide ^ was so informative and reminded me a lot of that ‘kid’ from MadTV… y’know, Stewart? (“Look what I can do”).  We crossed over a bridge and entered into West Philadelphia (born and raised, on a playground is where i spent most of my days…i KNOW you’re singing it).  And as we made our first turn off the bridge, we were treated to some kind of a ‘bust’ going down at a small mechanic shop, that was…erm…. awkward…. and as we drove deeper and deeper into West Philly, the more we realized that we were totally in the hood.  Like, the REAL hood.  Not like 20th street in Saskatoon, but like – projects.

Part of the great thing about the Murals program is that it helps communities like these rehabilitate.  Part of the process of applying for a mural in your community is being able to show that the neighbourhood wants a mural, and that the neighbourhood would continue to respect and look after the mural, and that there will be community involvement in the creation of said mural.  it’s really an amazing program, and TourGuideGuy said that those areas that have murals come together with a sense of pride in their neighbourhood which is really awesome.

We got out a few times to stretch and to get a better look at a few murals, on one of these stops i took this shot of Brad and Ozzie.

this was one of my favourite murals… this grandmother is making a quilt, that goes across this empty lot to this building where the kids are holding the other end of the quilt. 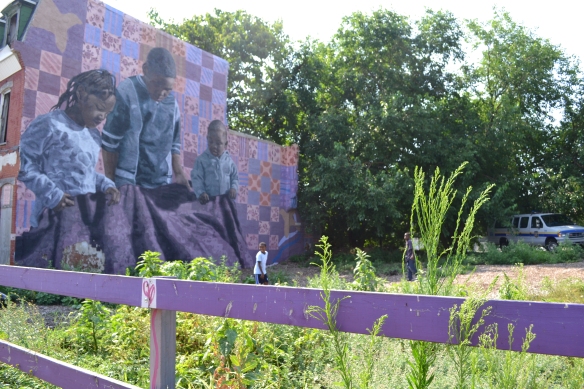 apparently this empty lot used to be a community garden… now it’s a place where police vans park, and small children throw wood chips at each other.

Ozzie had enough murals for the day and snoozed on Brad.  The trolley took us back into downtown and ended at Independence Hall where the Liberty Bell resides.  Unfortunately for us, Philadelphia was in the middle of a crazy heat wave, and it was sooooo hot, too hot for babies and 4 year olds.  Seeing as we’re not American, and we really didn’t have any interest in the Liberty Bell, we spent most of the rest of the outing in the air conditioned Information Centre.

Right close by was one of the first Quaker Houses, so mom and Cedric and i went to check it out.  It was interesting because some of our ancestors who came over from the old country landed in Pennsylvania and were Quakers.  (i think?) 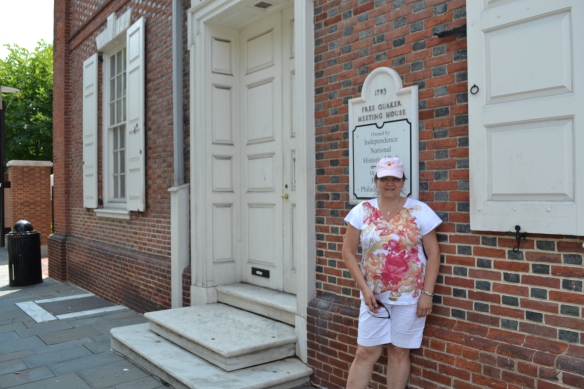 It was hot inside, but it was hot everywhere.  We wandered around waiting for the pick up time back to the hotel, Mom got this great shot of Ceddy and i. 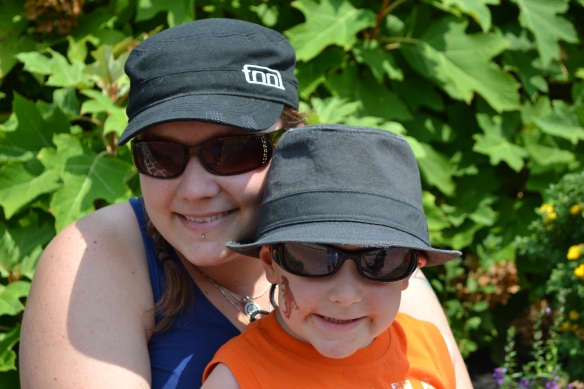 On the trolly back to the hotel Ozzie made a new friends. 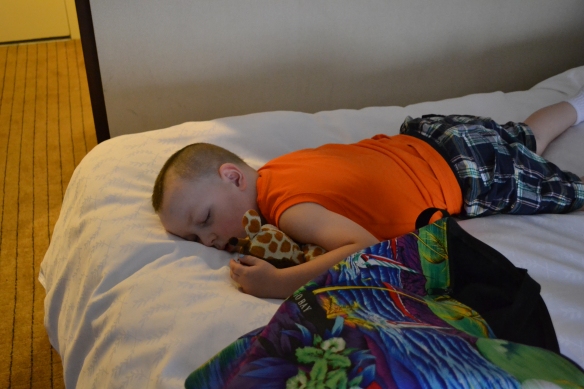 We ordered some pizza and watched some TV and just relaxed.

i took this shot as proof that i was actually on this trip – as it usually happens, the one with the camera has the least photos. lol.

and thus concludes our first day of sightseeing and our fifth day in Philly.

Help us get to the 2014 Moebius Conference in Washington DC

We were so fortunate to attend the conference in Philadelphia last year, because of your generous donations. The experience was completely amazing and we learned so much and met so many wonderful people, it's important for our family to attend as often as we can. With your help, we'll make it to the 2014 conference in Washington, DC