at the end of last year, i had spent a lot of time on my treadmill running – and i decided that i’d like to run a 5K (starting small) this year.  So i suggested it to my friend who was my work out buddy at the time.  We met through NICU and both our babies have medical ‘stuff’.

Anyway, she countered with “instead of raising money for someone else’s cause, why don’t we organize a run and raise money for Beads of Courage?” (which both our kids are participants of).  It seemed like a crazy idea, but kind of doable… so i agreed.  Let’s do it. How hard could it be?  Tara jumped on the phone and almost instantly had the support of a local running store in Saskatoon (Brainsport can i get a hell yeah?)

but then we didn’t talk about it again, too much, until mid-end of January.  Tara was inspired by all the photos of Color Runs on the internet (which is inspired by the Holi Festival in India) and suggested that our fun be a colour festival, and the symbolism of the runners being covered in colour was not lost on us.  We imagined our runners starting all dressed in white, and by the end, colourful rainbows – just as our kids started out with nothing but their medical ‘stuff’, and how they are accumulating these beautiful rainbow strings of  beads to tell their medical stories.  awesome.

In mid February we got on a conference call with Beads of Courage Canada and got their approval and support – we really just wanted to give back to the program that meant so much to our families.

We had never done anything like this before, and even though we weren’t really sure how to start, but we had some great help from Brian at Brainsport, and then – something magical happened – an amazing woman named Maryann contacted Tara saying she wanted to help us… so we met with her, and she was like an angel! This woman is organized, she has experience with runs and organizing runs, and she…knows…everyone.

She has been an wonderful asset to the run team! I honestly don’t know what we would have done without her.

So, we carried on and over the next couple of months we secured sponsors, ordered our colour, we ordered runners’ shirts, started accumulating swag for the registration bags,

Then in May, a few weeks before the run, we had a hiccup with the city and had to move run locations.  It was instant Panic, but Tara is a machine and she made everything happen and we secured a new location (which, oh my gosh, what an awesome park we used instead of the Meewasin trail) Lakeview Park was totally a better venue for our needs – the course was great, and gave an option for those with smaller kids to do 2.5K as the course was 2 loops, there are two playgrounds, lots of free parking, it really worked out well and i hope we can use the park again next year.

The day before the Sask Marathon, Tara and i sat at a table and talked about the our fun run, and sold Team Bead kits to the people running the Marathon, Half Marathon and the 10K the next day.  (this was not planned… but Maryann, she’s an ideas person, and this idea was great!) Tara and i had brought along our Team Bead kits to assemble for our run, seeing as we would just be ‘sitting there’ most of the day.  So, as we were assembling the kits, and talking about the Beads of Courage program (i say *we* but mainly it was Tara, she’s such a great public speaker) when a group of runners said they were really sad that they weren’t going to be around for the run because they were running a marathon in Jaspar… so, Maryann suggested; “why don’t you buy a set of team beads today and wear them in Jaspar?” and before we knew it, we were selling our team bead kits.  🙂

We raised $600 for Beads of Courage that day, and did get some more online registrations that weekend.

Tara and her daughter, myself, Peter from Roadrunners and Maryann at the Sask Marathon Expo

Leading up to the final day of registrations, we had about 80 or so people signed up to run, and we were feeling mighty good about that.  We kept being told that for a first year fundraising run, that was an excellent number! so, yay us!

Registration closed on May 29th at 7pm for our run, and in that day we almost doubled our registrant number.  We were completely sold out.  We had to turn people away!  Now, how can a fundraising run be sold out, you may ask? Well, we bought colour for 200 runners….thinking that would be SOOO MUCH COLOUR, but then, in the end, i think we had close to 170 people running, plus all the children (10 and under were free) and we wanted to makes sure that everyone had signed up got colour thrown at them.  next year, we will order more.

i picked up Tara bright and early, and we arrived at the park and the set up began… and the volunteers arrived, and the colour was divided, and the colour stations were set up (With Tara driving 500 lbs of coloured corn starch to their new homes in open containers…in my van… i wasn’t nervous at all O_O)… then the runners started arriving, and it looked like everything was happening on schedule, with no huge hiccups…. it was amazing.

myself, Tara, and Maryann about an hour before the run

Just a few words before we start!! (Tara, myself, and Maryann)

We all sang O Canada together (which i thought was a nice touch, and it signaled to everyone else that we were about to start) and then it was GO TIME!!

Tara and I could not stop smiling! and we decided to do a quick run through the colour stations as well. 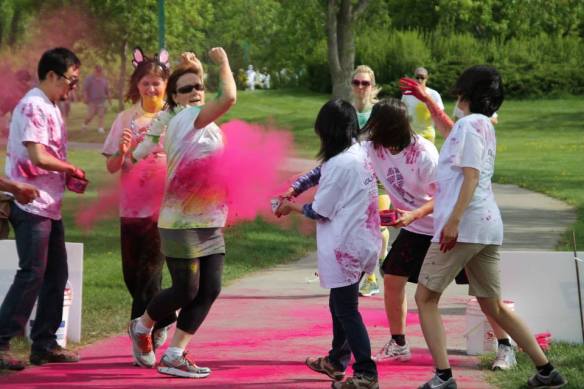 My brother in law came with his wife and kids, so awesome to see them there, as well my mother in law and some of her friends.

Cedric ran with grandma most of the way, he had a great time with his cousin Lila!

My family, Before and After!

So, it was an amazing day.  I look at these pictures and i just smile and smile.

We are already planning for next year, thinking of things that could have gone better, ways to improve upon the success of this year… but the absolute best part is that we raised over $13,000 for Beads of Courage! (I don’t have a final number, but i know it’s at least that!)  I am so proud of us.

and i do it for this guy.