There’s nothing quite like packing for a big trip.  I made list upon list upon lists, and even made a lists of the lists i’d made.  Surprisingly, i remained relatively calm – which is kind of a big deal for me.  Generally speaking, i worry a lot and have a great deal of anxiety, but the stars must have been aligned because i felt pretty good.

We got up at 6 in the morning to get everything packed into the van.  We got Ozzie ready and then woke up Cedric as late as possible, telling him TODAY IS THE DAY WE GO ON THE AIRPLANE!!  He was sleepy, but excited.

my mother showed up at 7:30 with my dad, who was driving us all to the airport.

I hate airports.  ugh.  and they’re bad enough when you’re on your own, but when you’re trucking around 3 large suitcases, plus a stroller, plus carseats, plus 3 carry on bags, plus a bag of our heavy suction machine… plus an almost-2 year old, and a 4 year old… oy vey.  We love Grandma.  She was a lifesaver.

Our plane was scheduled to leave around 10 am, so we had some time to kill.  Cedric and i spent most of that time going up and down the escalators…. over and over and over again… 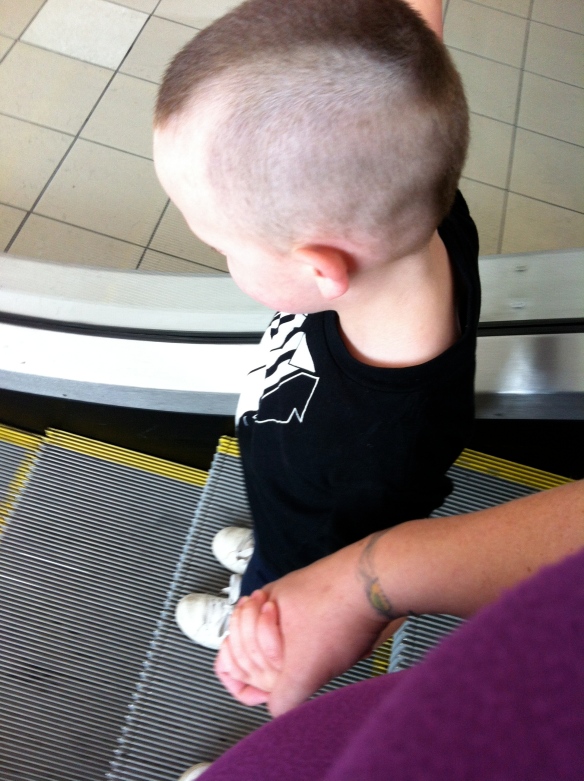 …and looking out the window at the planes, which at this point were still a novelty.  Before our flight, they changed our gate on us, which wasn’t a huge deal because Saskatoon’s airport is really small.

at the start of the day, he was still happy

Everyone was happy to get onto the plane, and the flight went really well.  Ozzie is a great flyer, and he had a fairly decent nap on the 3.5 hour flight to Toronto… Cedric didn’t like the loud sounds of the engines, but that was to be expected.  He and Grandma looked out the window as we took off, and Cedric said as we flew over Saskatoon: “Mom! It looks like a MAP down there!”

As we stood at the xray machines, getting all our stuff ready for scanning, Cedric decided this was the crucial moment for a full blown four-year-old MELT DOWN!!

I was sure that the security people were going to think we were abducting him.  Brad picked him up and practically threw him over his shoulders, all the while he’s screaming: “NOOOO!!! PUT ME DOWN!! LET ME GOO! LET ME GOOOOO!!!”

Aside from the melt down, customs and security went pretty well and we found our gate and settled in with some lunch, only to realize… our gate had changed… again… so we packed everything back up and found our way to the new gate which was on the other side of U.S. departures.

The flight from Toronto to Philadelphia was short and sweet, almost as soon as we were in the air, we were on our way down and by this point we were all exhausted.  We hired a shuttle to our hotel, and poor Cedric fell asleep unable to stay up any longer. 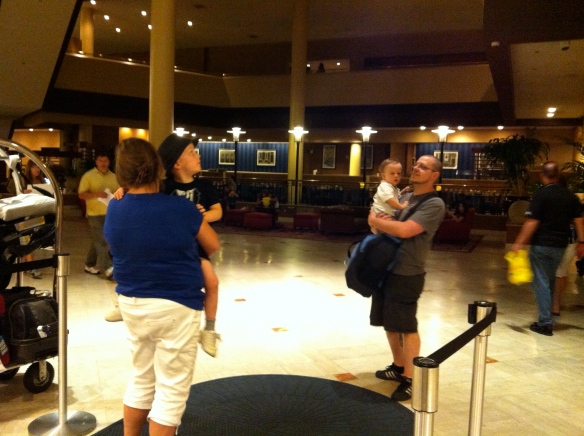 Mom and Cedric, Brad and Ozzie – made it to the Sheraton on 17th Street, our home for the next week

as we were checking in, we couldn’t help but notice all the little Moebis running around.  And to be honest, it was a little overwhelming… kind of like, a feeling of “we are not alone” and a feeling of wonder as we’d never seen anyone else with Moebius Syndrome in real life.

The Sheraton is a very pretty hotel, with a great high ceiling and escalators going up to the Mezzanine and Ballroom levels – which Cedric put miles on throughout the week – but our experience was less than stellar.

view from the mezzanine 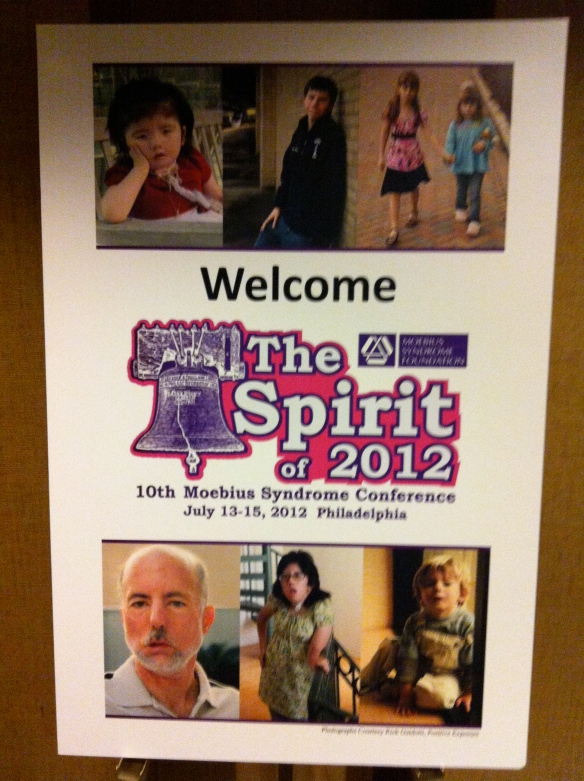 When i booked the rooms in February, i made a request to have a fridge and a crib in our room…. and we called again two days before we left to make sure that that was going to happen…. and when we got there: No fridge/no crib in our room.  They said at the front desk that someone would bring them up.  And we waited an hour, and finally Brad called down to ask about them, and eventually someone came with a fridge and when we asked her about the crib she said she’d go get it because “Oh, i guess the baby needs to go to sleep huh?” yep.  please. …and then she brought a play pen – to which Brad responded with: “That’s not a crib, that’s a playpen” so she left again and did eventually come back with a small crib which did the trick.

at this point it was just about 11pm Philly time (9 our time) and we hadn’t eaten anything and we were all exhausted, so we decided to order room service….. MISTAKE!!

after we paid for the 3 cheese steaks and kids burger (which he didn’t eat) and the taxes, and the hotel tax, and the convenience charge, and delivery, and 21% added gratuity and the tip that the dude who brought us the meal guilted us into giving him… our bill was $80.00!!!!

sadly, this cheese steak was NOT worth the $20.00 i ended up paying for it.

but, it did come with a tiny army of small ketchup bottles. so, i guess that’s something.

so many mini ketchups

lesson learned.  i wanted to post these pics to facebook… but… alas – WiFi service in the hotel is $9.99 per night!  We could have purchased a plan for our phones to get data service for the week, but we thought – we’ll just use the wifi in the hotel…. blah.  BLAH!!!!!

anyway, we put the room service tray outside the door, and called it a night.