Even though getting myringotomy tubes done is a very minor procedure, there’s no denying that it is STILL surgery.

Poor Ozzie, he did so well – he was tired and hungry and didn’t understand why he couldn’t just have a bottle… we arrived to find out that day surgery opened at 6:30 am, so yes, we were early.  When we were given a bed, the nurse came it to take Ozzie’s vitals and she said that they’d be ready to take us down by 7:20.

Well, 7:20 came and went. Brad and i took turns holding and bouncing and signing Twinkle Twinkle to Ozzie… trying to keep him calm.  When he’s really upset he gets frantic, then he can’t handle saliva and chokes.   Fun time.  No ‘crying it out’ for this kid. 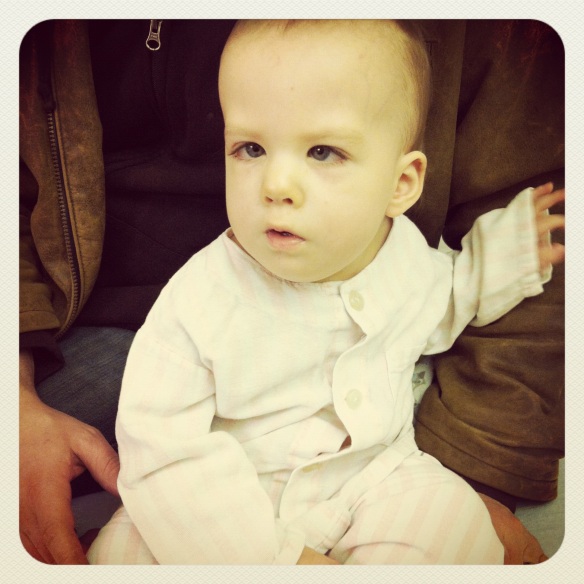 anyway – it was well past 8:00 before we were taken down to pre-op, where we sat in yet another waiting room…and waited to talk to the sleep doctor (the anesthesiologist).

Our resident anesthesiologist was named Dr. Kumar (yes! ….”Marijuana….but WHY??” quote from Harold and Kumar go to White Castle) and he was really nice and really very calm and reassuring as we voiced our concerns about Ozzie’s need for suctioning and how that will be impacted by being put to sleep.  When he finished explaining the procedure, i was pretty confident he’d be fine.  I asked him if there was a way that we could be present while they put him under, just so he’s not scared… but our hospital is not set up for that kind of thing.  Let’s hope that’s something they change when they eventually get around to building our children’s hospital.  i tried.

Then we met with the actual anesthesiologist, who was also good – but he spoke really fast and low, and i felt a little panicky cuz he was saying things to me, and Dr. Kumar was saying things to Brad… and it was loud with other patients and doctors…. but, in the end, he smiled and shook my hand and i was fine.

THEN we waited.  They told us Dr. Franke would come and talk to us about the procedure before hand.  I had met him before, Brad hadn’t.  So, when a thinner older doctor sat down in front of us with a clipboard, i was confused but thought maybe he was yet another medical professional we needed to see…. he starts looking at Ozzie and he says;

“So, which side are we doing today?”

and Brad and i look at each other and say… “Both?”

“Oh, so it’s gotten worse has it?” then he asked us about some medical condition we’d never heard of… and brad and i just looked at each other …

“uhm……” i say while peering down at the clipboard in his hand… which clearly does NOT say Ozzie’s name.

The doctor then looks down at his clipboard, and looks back at us… and says: “i’m at the wrong place.  How embarassing” and he got up and walked away to another family.

WHA!?? okay, i mean, as if our nervers weren’t already rattled….

then… i see him. Dr. Franke – who reminds me of my dad, and i feel okay again.  He approaches us with Dr. Kumar, the other Sleepy Doc, and the pre-op nurse.

He shakes our hands and he asks:
“What am i doing today?”
we say: “TUBES”
“Good, then we’re all on the same page.”

he gave us the lowdown and does the pre-op check with the medical staff.  I feel confident.  Until they say they are ready to take him away.  Oh. Heart. Break.

Brad had been holding him all this time, and i could see he felt the same way that i did – letting him go was the so awful.  Brad handed him over and we said goodbye, and told the nurse that if all else fails, sing Twinkle Twinkle Little Star.

Then we walked out and went to the waiting room, and waited.  We were there for 5 minutes, and i left to use the washroom.

when i came back, Brad said that Ozzie was already done and in recovery and that Dr. Franke would be back in a few minutes.

Everything went smoothly – he cleaned out his ears, and the fluid inside was thick, so it had been there for a long time already.  Good thing we did this now, before it got worse.

A few minutes later i was called into recovery and followed the sounds of my crying baby.  He was so very unhappy, and in pain, and was completely inconsolable.  Even after a bottle.  Poor guy.  They gave him some tylenol and when we’d been there for half an hour or so, they wheeled us back upstairs to finish recovery.  When the chair started moving, he settled, and managed to fall asleep in my arms.

when he woke up, we got the discharge information – and he had another bottle… then we were ready to take our little man home.  It was now just about 11 am.

Such a long and exhausting morning for everyone.

happy to be done, though.

happy to see the improvements in Ozzie’s balance, and even to see some variation in his vocalization – but best of all, he dances all the time now… love it.

Next up is his MRI on Tuesday – which will be a bit more of an ordeal, he will need to be intubated and put completely under for it.  The MRI is scheduled for an hour, and then there’s the before and after for recovery… sigh…. we will keep you posted.