This morning Ozzie and I hauled ass to get to our Eye appointment by 7:50 am.  They had called last week and asked if we could come a few minutes early…. so we did…. by some amazing miracle of there being NO traffic down town this morning.

So we go into the waiting room and get taken into one of the rooms right away – where a very lovely woman showed Ozzie squeaky toys, and prisms, and shone lights in his eyes, and showed him a series of cards with white shapes on them, whose lines started thick and progressively got thinner.  This is how they test vision in babies, she said, when they lose interest they can no longer see the cards very easily.  Okay…

Ozzie’s vision is quite good.  One of their big concerns is that because he is crossed eyed – he may start favouring one eye over the other, causing the vision to fail in the lazy eye.  So far, Ozzie uses both eyes – interchangeable, depending on which one is easier to see the object with.  So, his laziness in head movement is working to his benefit in the vision department. 😉

After this vision testing, we were sent back to the waiting room with the words: “the doctor will see you when she gets here…”

Yeah, the doctor doesn’t actually come in until 9 am, but they scheduled us for an 8am appointment… leaving us to sit in the waiting room for 40 minutes… with a baby who is usually napping by 8:30…

i tried to keep him awake, poor kid… but in the end, the poor little man’s head dropped onto my chest and he passed out…. and the doctor breezed in at 9:08 – and she said: “Okay, if you could just wake him up now…”

to which i said, in mama bear fashion; “y’know, he was AWAKE at 8 o’clock, which was when his appointment was scheduled… he was even awake at 8:30… this is his nap time, and now you want me to wake him up?” i was a little pissy… doctors.  psh.

so i woke him up.

he was unimpressed. naturally.

But, eventually i calmed him enough and she was able to examine his eyes.

We talked a bit about his eyes and how well he closes them in his sleep – and she said to put some eye gel in his eyes at bedtime, it won’t hurt him, just help keep him hydrated. She also said he should wear sunglasses outside, which we’ve already started doing with him.

i asked her about the possibility of eye surgery.  she had mentioned eye surgery at our last visit – but because he hasn’t had an MRI since he was in NICU, she wants to wait to see what the next one says – it will determine the course of action and the surgery plan… to see how much of the muscle is operational, i guess.

i rock at sunglasses enforcing, and also letting doctors know when i’m pissed and their booking procedures are B.S. 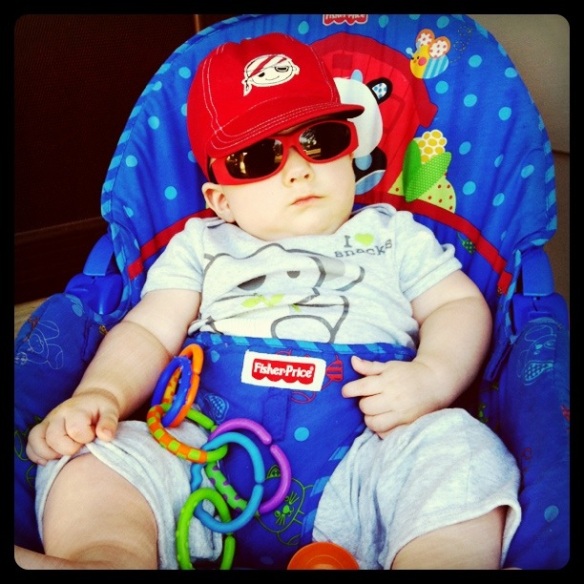